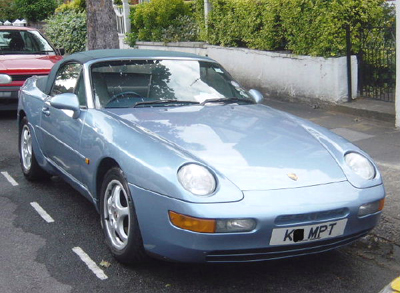 The Porsche 968 is essentially the successor to the Porsche 944. It has the classic GT front engined, rear wheel drive layout with the added advantage of a rear transaxle giving almost perfect weight distribution. The low nose line and wide wheel arches help to accentuate the beautiful lines of this classic shape, a reel head turner especially in Porsche Guards Red livery or Speed Yellow. 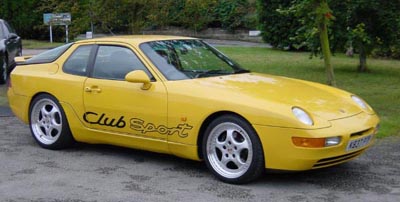 The interior remains as produced in the 944 with the famous ‘oval dash’. The same robust materials have been used which have given all Porsche owners many years of trouble free motoring.

Porsche 968
The door mirrors have been streamlined with the tear drop effect and the wheels are 5 spoke Cup design alloys as with the 911(964) and 928 GTS. As with the Porsche 928 there is a ‘bee sting’ aerial mounted on the roof. The rear bumper is now almost indistinguishable from the bodywork, being more blended and with integral rear light clusters, at the rear we also find the spoiler is the bridge type..

Because of the engine heritage and these bodywork changes some people have referred to it as the daughter of the 928. 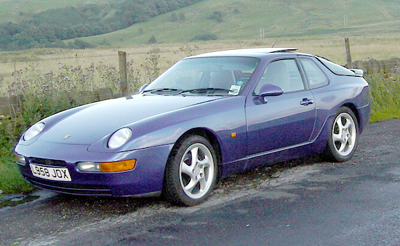 The engine is a very sophisticated version of the 4 cylinder, 3 litre, 16 valve unit first used on the Porsche 944 S2. All alloy with Vario Cam for optimum power throughout the speed range. Improved combustion chamber and inlet manifold design, give the engine 240 HP at 6200 rpm and torque of 305Nm at 4100rpm (58Kw/Litre). At the time of production the engine had the highest displacement per cylinder of any car engine and also the highest torque output of any unblown 3 litre engine. Clearly Porsche had invested massive development on this engine with the required result. As with previous engines twin balancer shafts keep vibration and noise down to more than acceptable levels.

The rear mounted gearbox is a 6 speed manual or a 4 speed tiptronic, the first ever on a production car. The tiptronic utilises the research and development done jointly by Porsche and Bosche to manufacture a unit that combines the best qualities of a manual gearbox for the open road with the best qualities of an automatic gearbox for town driving.

Porsche 968
The chassis is a delight with it’s near perfect weight distribution and very stiff characteristics helped by the torque tube connecting the engine to the gearbox also some 911 components have been used in it’s production.
All round independent suspension, McPherson struts up front with semi trailing aluminium arms at the rear.

Porsche brakes have always been the envy of most road sports car manufacturers, as this is usually where most road sports cars start to fail, no matter how fast they are in a straight line if you can’t take a bend at the right safe speed then you can’t use the cars speed. The Porsche 968 has carried forward this important philosophy with little or no discernable fatigue even under harsh use. Self ventillating discs, open ventillation alloy wheels and a study of the air flow around the discs contribute to more than adequate cooling and so minimal fatigue and break fade. ABS adds even more safety to the already excellent braking system. The wheels themselves are designed to prevent the tyre coming off the rim in the event of a sudden pressure loss at speed.